Five Technology programmer Travis Neiderhiser will be leaving his desk later this month to head to Afghanistan with his Army Reserve Unit, the 407th Civil Affairs Battalion of Minnesota. Army Specialist Neiderhiser (soon to be Sergeant) will be leaving Five’s friendly confines for a 400 day tour as his unit operates in support of both conventional and special operations forces. 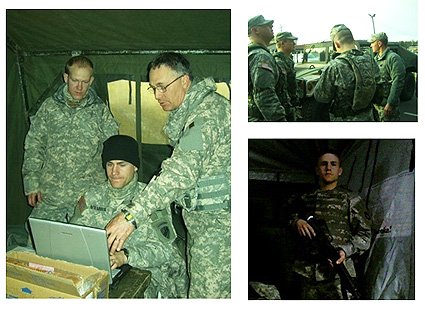 Just as many thousands of United States soldiers, both overseas and here on US soil, Travis is making a huge sacrifice to defend our freedom, protect our country and work for a better future.

While your opinion on the war may be for or against, the reality of what a soldier puts on the line to do their job is nothing less than incredible.

For Travis, this means leaving his wife, 4 year old daughter and son … a son that is scheduled to be born on July 19th, 2010.  If’ he’s lucky, he’ll get one week with his new son, before he has to endure a year without holding him.  These types of sacrifices make it easy for us around the office to pick up the slack in his absence.

In the office, we’ll miss the humor, the random outbursts, his YouTube finds and the energy that Travis brings to the day.  We’ll have far more Diet Coke available while he’s gone, but maybe we can care package some over there.  Travis has come along way in the last 2 years at Five in many aspects and many of us call him a friend more than an employee or co-worker.

While we throw him a few parties to send him off in style, we also look forward to the welcome back party in about 400 days.

I’m also not willing to let his service and sacrifice go unnoticed.  I invite you to comment with your thoughts or encouragement, it’s the least you can do for someone willing to put it all on the line for you.

Thank you Travis, thank you 407th and thank you to all US service members.