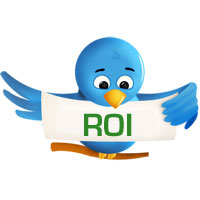 The value of Twitter is something that is widely debated as it continues to grow.  The extremes are those who can’t live without it and others that can’t fathom how it’s worth one second of their day.  In the middle are a lot of people trying it out, maybe for their small business, maybe just for fun.

My Twitter use has a very high value to me and if fact it even has a number.  I’ve posted in the past on the benefits Twitter showed me right form the start, how it can drive blog traffic and a big attempt to amount 100 reasons for a business to Twitter (still short, add one!).

As of the tweet I’ll put out to announce this blog post, I’ll have closed just over $25,200 in business only and directly because of Twitter and my 1,870 updates. That is just plain cool.  Even better is I have many more projects being quoted, referrals being given and connections being made.  Strictly from Twitter.

I’ve received this business from Twitter in a few routes:

Do you have a Twitter ROI or a Value Per Tweet (VPT)?  Share it if you can.  I’m constantly amazed at the value I get from Twitter in news, connections, knowledge, ideas and yes … even sales.  I’m looking to add to my Twitter ROI.